In March, Twitter celebrated its 5th birthday, and my-my, how far it has come.

Despite its short lifespan, there’s no denying the site’s maturation. From changes in design and popularity, to celebrating memorable events such as the first tweet from space, here are some of the highlights of Twitter’s half-decade of existence:

March 2006: Jack Dorsey creates Twitter. On March 31, he publishes the first tweet ever, which says, “just setting up my twttr.”

Just as an interesting comparison, it was on March 10, 1876 that Alexander Graham Bell spoke into the first telephone. His words were: “Mr. Watson, come here, I want to see you.”

July 2009: Twitter is welcomed into the English language, being officially recognized by Collins English Dictionary as both a noun and a verb.

October 2009: Less than a year after passing the 1 billion tweet mark, Twitter passes the 5 billion mark. Talk about growth!

January 2010: NASA astronaut T.J. Creamer, on board the International Space Station, communicates from space via Twitter.

July 2010: Twitter introduced the “Suggestions for You”  feature, offering personalized suggestions of users that may interest you.

April 2011: The new twitter homepage is introduced. A new and improved look calls for new features as well, including the Local Trends feature, which expands to more than 70 cities and countries.

And of course, on May 1, 2011: Twitter is all a’twitter with speculation and then confirmation of the death of terrorist Osama Bin Laden. At one point, 5,106 tweets per second are recorded. This is the third highest tweeting rate, falling behind the numbers registered during New Years ’11 in Japan and the fatal tsunami there in March. 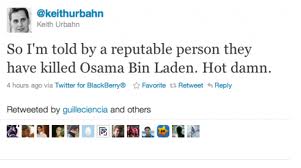 And it seems that Twitter’s success continues to grow substantially. More and more companies, celebrities, and average individuals are hitting the site to share their 140 character opinions. As for myself, I’ve been a member since 2008 and haven’t looked back since. I still rely on Twitter for news, both of substantial quality and the fluff celebrity pieces. As for the events of this past May 1st, I actually first heard the news from Twitter. I also first heard of Michael Jackson’s death via Twitter. It’s such a convenient source for news, often providing you with the perfect amount of headline and a link to more information. I’m a big Twitter fan (as may be apparent from my ramblings), what about you? Will it live on? Or are its days numbered?

Photos of my life

What I’m Writing About