Will Arnett? Of course.

Celebrity guests from their wacky group of friends? Give me more.

Apparently Denny’s has been reading my mind and, in light of no new Arrested Development movie, they’ve instead enlisted Bateman and Arnett’s comedic stylings for a new social media campaign.

A new web series put on by Denny’s has hit the web: “Always Open.” Playing off the idea of American diners, celebrity guests chat it up with host David Koechner (best known for his roles in Anchorman and The Office) in a local Denny’s as they polish off plates of the restaurant’s meals. 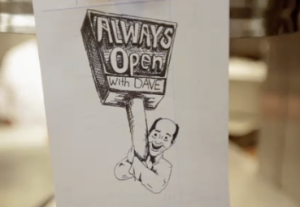 Denny’s, in an attempt to connect with the younger generation, hired Bateman and Arnett’s production company, DumbDumb, to write and produce these shorts for online viewers. The hope is to not only connect with the viewers, but to encourage a sense of openness and consumer feedback.

Explaining his interest in the project to Ad Age, Bateman said:

“It’s the most efficient way to communicate our tone of humor instead of trying to explain to another actor or write it down. It also shows our peers and our friends that we’re willing to put ourselves out there so when we ask some of our famous friends to come play with us we can say, ‘We did it, now we’re doing it with you.'”

And what a group of friends that includes! Upcoming guests are rumoured to include Kristen Bell, Will Forte, Sarah Silverman and, Arnett’s real-life wife, Amy Poehler.

The real challenge will come in getting a returning viewership. With short web series such as these, it’s difficult to guarantee that an individual will come back for more. Hopefully, however, with the above list of guest stars already announced, adoring fans will flock to the videos to see their favorite comedians enjoy a Denny’s meal and a little chatter.

After having watched the first video, I have a few opinions of my own. I am automatically enchanted by all things Jason Bateman. I love his humour and it definitely worked for the scenario. Host David Koechner is also a fine act, but for me Bateman steals the scene. There’s no real action– it quite literally is just these two individuals sitting down and having a rather comedic (and odd) conversation. I was left wondering how much was improvised and how much was scripted.

Denny’s was perfectly placed as the location without over-emphasizing their brand. There is brief mention of the name by the actors, and of course the restaurant is credited for the series, but I think they’ve done a good job of not inundating us with their involvement. This allows the audience to sit back and enjoy the wit, without being weighed down by commercialism. And yet, I never forgot they were in a Dennys.

I can personally guarantee them my loyal viewership, due largely to the names that have been attached to the show, but how long will other’s be able to sit through meal-time talk? I’ve embedded the video below and hope to hear some more reactions. What do you think? Am I just blinded by my Jason Bateman and Will Arnett love, or does this mini series have some actual potential?

The videos will be launched on both the Denny’s Facebook and College Humor.

Photos of my life

There was an error retrieving images from Instagram. An attempt will be remade in a few minutes.

What I’m Writing About